Tropicana’s new plant in Zeebrugge, Belgium is the company’s largest investment ever outside the USA. The plant sets a new global standard for highly automated juice processing solutions.

Tropicana Products Inc., with headquarters in Bradenton, Florida and a division of PepsiCo since 1998, is the world’s leading producer of branded fruit juices. Tropicana 100 % juices and juice drinks are enjoyed all over the world. As the only truly global juice business, the company has captured almost 6 per cent of the world juice and juice beverage market.

The large investment in Zeebrugge in Belgium is a result of this growth. The plant provides primarily the United Kingdom, Benelux and Scandinavia with a variety of fruit juices – with original style orange juice as the crown jewel. It is the first of Tropicana’s European plants to be built from scratch – the others are converted dairies or juice factories.

“Starting from scratch was a massive challenge for us,” says Philippe Leys, engineering manager for Tropicana Europe. “This also put pressure on our suppliers, who must use their knowledge to guide us through the process in a very proactive way.”

Tetra Pak’s deliveries include many components from Alfa Laval such as a large number of mix-proof valves with ThinkTop intelligent valve control units and plate heat exchangers both as stand alone units for different heating and cooling duties and as integrated parts in processing modules.

The Tetra Pak sales team found alternative solutions within several areas and proposed its own automation architecture and pasteurizing expertise. Tetra Pak had previously built pasteurizers for Tropicana in Florida in the United States and this carried considerable weight in the offer. By adopting a solution that already met European standards, Tetra Pak could offer a time-saving and cost-effective construction process.

“I will never forget the first meeting with Tetra Pak”, says Wim Koopmans, Tropicana’s project manager for the construction of the plant and now plant manager in Zeebrugge. “They presented a team of specialists who were all top of their fields. Although we were very pleased with the set-up in the initial tender, Tetra Pak made us realize that a large number of improvements could be made.”

Both Wim Koopmans and Philippe Leys say they rate Tetra Pak’s performance during the tendering process as first class. The team was multinational and cross-disciplined, but still managed to give the customer the desirable “one stop-shop experience”.  The signing of the contract took place in December 2001, and on December 10, 2002 – the very day stated in the contract – the first juice trickled through the pipes in Zeebrugge. Since then, the work has focused on fine-tuning the plant’s process and quality assurance systems.

Tetra Pak has shown a large commitment by continuously challenging the way Tropicana is managing the plant, says Leys, and this has included everything from staffing issues to automation handling.

For Tetra Pak, the process has been an interesting journey. “We have gone through a complete learning curve, which I think both companies have benefited from,” says Ron De Keersmaeker, Director Processing Systems at Tetra Pak Belgium. “Our co-operation has been very open and straightforward all the way from the tender until today.” He points out that people buy from people and not from companies. Therefore, it was essential to create a team that not only had the professional knowledge, but also matched the customers from a personal point of view.

The order for two other Tetra Therm Aseptic Drink pasteurizers and one Tetra Alsafe aseptic tank for the Zeebrugge plant confirms Tropicana’s satisfaction with Tetra Pak, as does another agreement for the testing of a Tetra Top production line for the plant in Hermes, France.

Wim Koopmans summarizes his impression of Tetra Pak. “You know you have the right supplier when you think that if they cannot solve the problem, no one can.” 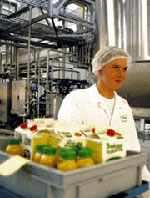