Thanks to an innovative solution from Alfa Laval, a traditional Brazilian agribusiness company is setting the pace in the country’s fast-growing biodiesel industry. 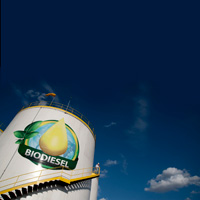 The small town of Ljuí in Brazil’s southernmost state of Rio Grande do Sul, home to brand new installations built by agribusiness company Camera, is surrounded by some of the world’s most fertile farmland.

The gently rolling hills are carpeted with the deep, almost luminous green of young soya, interspersed with stretches of subtropical forest. This is a landscape steeped in farming traditions, worked by descendants of German and Italian 19th-century immigrants for the most part, together with a mix of African and European and indigenous people typical for Brazil.

It’s a friendly place too. At Camera’s facilities outside Ljuí there’s a warm welcome in the local singsong accent. But what strikes the visitor first is the scale and modernity of the new plant, at the cutting edge of one of Brazil’s most modern and fastest-growing industries, biodiesel.

This is a new departure for Camera. The company was founded in 1971 as a soya trader, buying the grain from farmers and agrochemicals. Soya farming in Brazil was in its infancy then, but it has grown quickly over the years, and the country is now the world’s second biggest producer after the United States.

Camera’s business has grown in tandem. Today, with an annual sales outlook of 1.6 billion Brazilian reais (about EUR 710 million) and 1,000 employees, it deals with 25,000 farmers who produce some 15 percent of all the soya in Rio Grande do Sul.

“At the heart of Camera’s core values are tradition and modernity,” says Roberto Kist, industrial director and a member of Camera’s controlling family.

The company has always maintained close relationships with its farmers, through a network of casas, or houses, that cover about 60 percent of the soya-growing areas in the state. The term reflects the personal ties between Camera and its farmers. Each of the 42 houses operating today has silos for receiving soya and other grains (Camera also deals in wheat, rice and sweet corn) and storage for the materials, such as fertilizer, pesticides and herbicides, it supplies to growers.

In 1998, following almost three decades of close cooperation with the family and other farmers, Camera decided to take the business of adding value a stage further by buying its first soya crushing plant in Santa Rosa, where it has its headquarters. From 300 tonnes per day of beans in 1998, the plant is now expected to crush 1,500 tonnes per day during the harvest.

The company took another big step in 2007 with the building of a refinery, also in Santa Rosa, making possible Camera’s debut as a retail brand of soya oil, which grew quickly to 35 percent of the market share in Rio Grande do Sul. This also marked the beginning of Camera’s relationship with Alfa Laval – a relationship that has grown quickly, partly because Alfa Laval’s innovative techniques have contributed to Camera’s vision of combining tradition and modernity.

“We have always sought to preserve traditional values in our relationships with our farmers and to extend those values to our dealings with other suppliers and customers,”Kist explains. “And modernity is something we seek every day as a means of securing lasting sustainability for our business.

“It’s Alfa Laval that gives us access to modernity, to the latest technology,” he says, “and we want that to come in a traditional relationship, covering more than one business area, as something that is always present. We don’t have our own strong base of engineers, so Alfa Laval has become our auxiliary in this respect. We put a lot of value on Alfa Laval’s support, and we are very open with them. We give them a lot of access to our business, because if we didn’t they wouldn’t be able to help so much. It’s a relationship of openness and trust.”

With access to Alfa Laval’s expertise, in 2009 Camera took the decision to diversify further by moving into biodiesel, one of the most dynamic areas of Brazil’s fast-growing biofuels industry. After consultation with Alfa Laval, it decided to invest in a pretreatment plant using enzymatic degumming – a recent development with significant advantages over the more common method, known as neutralization.

“With neutralization you lose a lot of product, and you produce a lot of residues with very little value,” says Marcelo Cardoso, Camera’s industrial manager at Ijuí. While neutralization uses chemical reactions and a lot of water, the new method uses enzymes to remove impurities in a largely physical process, separating out fatty acids and phosphorous as high-value by-products. Although more expensive than neutralization, enzymatic degumming delivers better results because of the high demand for the by-products that result.

Enzymatic degumming is a new process in Brazil’s biodiesel industry, but it is beginning to take hold. Camera’s plant entered production at the end of 2010 as one of four or five such installations in the country, all developed at about the same time.

“Our view is that we have entered the biodiesel business in its third wave,” Kist says. The first, he explains, was driven by government efforts to support poor farmers in remote parts of Brazil, especially in the Amazon. It focused on alternative fuel sources such as manona (the castor oil plant).

The second phase focused on soya, which quickly came to dominate and now provides 80 percent of all biodiesel in Brazil.

Camera is part of the third wave. “Our entry into the business is significant because it marks the arrival of verticalized companies, which cover the whole business chain from origination to refining,” Kist says.

This vertical business model has attracted considerable attention. Late last year, to raise investment capital, Camera sold 17 percent of the company to a consortium of some of Brazil’s biggest pension funds: Petros (run by Petrobras, the national oil company), Funcef (of Caixa Econômica Federal, a government-controlled savings bank), Valia (of Vale, the private sector mining giant) and Fapes (of BNDES, the government development bank), plus the BNDES’s investment arm, BNDESPAR.

How much the consortium paid was not disclosed, but the deal will provide Camera with BRL 200 million for investment over the next two to three years. Camera has committed itself to developing new levels of corporate governance in preparation for a stock market flotation in about three years.

Camera’s biodiesel business, though still in its infancy, is already growing quickly. At Ijuí, it has the capacity to produce 400 cubic metres of biodiesel a day. It recently applied for permission from the ANP, Brazil’s oil and gas industry regulator, to increase capacity to 650 cubic metres a day.

“We are still newcomers to this business, but we have already identified the need to add capacity,” Kist says. “The company has this vision that we must add value. It’s in our DNA.”

It’s Alfa Laval that gives us access to modernity, to the latest technology, and we want that to come in a traditional relationship, covering more than one business area.