Goodbye pulp and paper, hello bioplastics, biofuel and fabrics. In the face of slumping prices and increased competition, and with consumers demanding more sustainable products, pulp and paper mills are being converted into biorefineries. 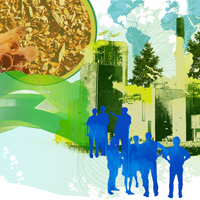 The sprawling, steaming mill at the mouth of the Mörrum River in southeast Sweden has been producing paper pulp for the European market for more than 50 years. But with the move towards reading online rather than in a paper format, the future of the plant, with its 420 employees, is under threat. So in December 2010 the mill’s owner, Södra Cell, announced a seemingly minor conversion to the plant, with one of its lines switching from producing paper pulp to dissolving pulp for the production of textiles.

With its low-key announcement that it is entering the textiles business, the Mörrum mill is in effect becoming a biorefinery and thus part of a shift towards producing fuel, chemicals and materials from biomass rather than from petroleum.

Exactly what a biorefinery is is open to interpretation. For some it is a single facility, such as the Mörrum mill, where biomass – be it wood or sugar beet or maize – is processed into a wide spectrum of bio-based products. These can be high-value, low-volume products such as chemicals or materials, or low-value, high-volume products such as advanced biofuels. Niklas von Weymarn, of the VTT Technical Research Centre of Finland, takes the broad view. “I see the biorefinery as a concept,” he says. “It can be something on a drawing board or already in operation where many companies and factories are cooperating to refine biomass into high-value products.”

The pulp and paper industry has long looked into ways to maximize its turnover with side streams such as the production of heat and power.

“These efforts have been going on for 100 years or more,” says von Weymarn. “But today the world looks different, and that opens up the demand for new solutions and more sustainability. The changing world now has a need for the kind of solutions biorefineries can provide.”

Biorefineries based on various renewable raw materials are in operation or in the planning stages around the world, although some would argue that the true biorefinery has still to be fully realized. In the US, Cargill Dow is producing polymer of lactic acid (PLA) for making carpets, T-shirts, cups and other products from cornstarch. DuPont is behind a similar polymer, called Sorona, from the same raw material. In the Nordic region, pilot-scale biorefineries are producing
advanced biofuels, often with by-products of the pulp and paper industry as the feedstock.

While no one expects that the alternative fuels produced by some biorefineries – such as dimethyl ether (DME), methanol and Fischer-Tropsch diesel – will ever replace fossil fuels for energy, these facilities could replace today’s oil-based chemicals and materials.

“Of the fossil-based raw materials – coal, oil and gas – 96 percent becomes energy and 4 percent chemicals and materials,” says Peter Axegård, Director of Business Area Biorefining at Innventia in Sweden. “That 4 percent could be completely green. Is that more important than producing 4 percent more green energy? Maybe it doesn’t matter from a holistic perspective, but if you can make more money making interesting products, that of course is attractive.”

Von Weymarn adds that biorefineries can help the world meet the needs of its evergrowing population. “We need more energy, more food and more of these products that are made from oil. On the other hand we know that the supply of oil has peaked or will peak soon, and so while we won’t run out of oil, the price will go up. And I think this is the role of these biorefineries: to lower the pressure on oil with respect to these products that the planet’s population needs.”

Biorefineries have proved themselves to be economically viable. Some, like the facility in Lenzing, Austria, which is the world’s largest integrated pulp and viscose-fibre plant making textiles from wood, have high profit margins. The Lenzing Group announced in December 2010 plans to invest some 285 million euros in new production capacity worldwide to help it meet rapidly growing demand for man-made cellulosic fibres.

While those biorefineries in operation today making high-value products are doing so without the need for government support, von Weymarn says that subsidies would help the expansion of the sector.

“Governments can help by supporting R&D and building the first factories, but I don’t believe anybody thinks biorefineries
will need support in the long run,” he says.

Unlike the recent controversy over production of first-generation biofuels competing with food production, access to raw material is not an issue for biorefineries because of the relatively small size of the markets for the chemicals and material they produce. The market for carbon fibre for cars, for example, is overshadowed by the market for the fuel on which those cars run.

“There is a lot of raw material; the question is what is the cost of the raw material and what is the economic situation,” says Axegård. “For instance it is impossible economically to make ethanol from wood in Sweden without subsidies. So you need something that is higher value. The trick is to find the right products and in some cases to develop the market, and that takes time.”

Von Weymarn says that most of the technology that will allow biorefineries to live up to their potential is already in place. “If you build a complete set of factories you are applying a lot of existing technology, and you might need a few new improved technologies. If you take the gasification route to diesel, the only technology you need to develop is for cleanup of one of themintermediate products.”

The big challenge, he says, is finding the right combination of players. “You need partnerships, and then you have a concept where the economics are feasible. It becomes easier when you go to higher-value products, but these do not turn up overnight. You need to make strategic alliances, and you need to understand the market. This is long-term development work.”

Today the world looks  different, and that opens up the demand or new solutions and more sustainability. The changing world now has a need for the kind of solutions biorefineries can provide.